Whilst evaluating the various art and culture modules I’ve taught to my groups of fifteen and sixteen year old’s this year, an interesting point has come up. I’ve taught across a variety of themes, but there is no doubt, that three in particular have stood out in the eyes of the pupils, and they all involve, in some way, questions of where the line lies between legality and illegality. I’ve looked at copyright and the remix in the cultural sphere, and how it impacts on artists and other creative practitioners. We’ve covered the question of artists and filmmakers engage with the extremely newsworthy theme of illegal immigration and we’ve spent time looking at street art and its place on the fringes of artistic production.

These links with illegality in various ways has on my part been a completely unconscious decision, but is the preference expressed by pupils in relation to these themes more than just a coincidence? 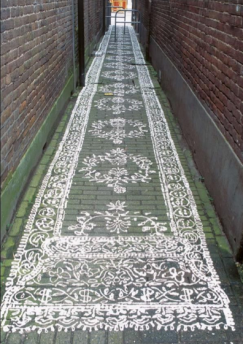 In the eyes of many young people the world of art and culture exists in many ways as something of a detached entity, particularly when it comes to visual art.  You go to the museum to see it and often it seems to boil down to a question of whether you like it for its aesthetic qualities or not. If there is an accessible narrative, for young people it is a narrative that is often a huge distance from their own world of experience.

Maybe in this context it isn’t that surprising than a cultural theme that engages with a relatively straight forward distinction of legality and illegality does provide a point of access. Most children and teenagers are quite interested in a sort of natural justice, things that should be allowed and things that shouldn’t.  All three of these modules have played into this area in different ways. The response of my pupils in all three cases has been incredibly positive. They feel we are engaging with the real world, they tell me that it’s helping them understand complex issues better and they are learning to appreciate that artists and other creative people have important and relevant things to say in these areas. In short it is a win, win, win situation! 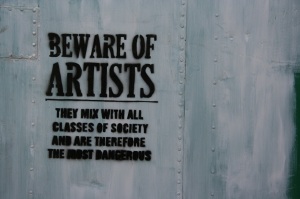 I suppose in a way it still reduces down to being able to link up with narratives and stories. Stories of the artists and musicians working in areas of dubious legality and being pursued by multinationals who own copyrights, illegal immigrants struggling to cross (or stay within) borders and the nocturnal world of the illegal street artist all have their own narratives, and better still they are narratives based on reality.

For me there is perhaps a lesson and an opportunity here, playing into these sorts of narratives must be possible in other areas too. More emphasis on the personal history of a particular artist, designer or architect perhaps or seeking out dramatic social contexts or dramas behind a given creative work. Once engaged, it never stops to amaze me, how far you can go, but opening the door is the challenge and finding the route in is oh so important.

One of the motivations for starting this blog eighteen months ago was that the school where I work had decided to make the step to a more digital rich form of education with every pupil ultimately working with an iPad.  We are now approaching the end of the first year of this project and our current first years (12 year olds) have a year behind them of an increasingly light school bag and an increasingly full tablet in their bag. It’s time for a little reflection and evaluation I think.

So what have the benefits and gains been this year?

The pupils have always got their books with them.

After years of pupils regularly forgetting to bring the books they need to school, this problem seems to have instantly disappeared. For some reason the pupils never ever forget to bring their iPad! I’d like to think it was because of the lesson material that is now on the tablet and is needed in the lessons, but I’m realistic enough suspect it might have more to do with all the other uses the device has.

My lesson material has never looked so good

I’ve always written all my own lesson material. For years I have sent my booklets of text and images to our school printer to be printed out in black and white. Now though I deliver it as PDFs to the pupils, complete with YouTube films, links to websites and all of it in full colour. The pupils open the booklets in iBooks or some other app where they can make notes on the material, add drawings and so on, before saving all onto the iPad for next lesson.

Maybe it is still the novelty of the device and the apps, but all the underlining, highlighting, post-it stickers and other accessories that these note taking apps offer almost seems to make the pupils more keen to make their own notes.

Instant internet access is really pretty handy in the art room, it really does offer too many possibilities to name!

Yes we still work with paint, pencils, clay and wood. But we do also now work with digital drawing techniques, painting apps, apps that help you explain perspective, ones that allow pupils to build word webs and so on. The drawing and painting apps really offer new sorts of opportunities for a freedom and rapid approach that even the most cautious of young artists seems to respond well to. Some even allow you to play back the process of the development of the image in a short film. These are all aspects that are totally new to my art room this year.

There are so many out there, the choice is overwhelming. Often the the problem is more finding the ones best suited to your class, and once found remembering to return to them on other occasions. Sharing information and finds with colleagues is crucial in this area.

I’ll post some views about the creativity, and at times pseudo-creativity offered by apps sometime in the future.

Individuality and own pace in lessons

The role of the classical form of teaching has been changing a little through the year. Yes, I do still stand up at the front and explain things to the whole class at times, but other options are coming along too. I’ve experimented with getting pupils to watch YouTube films not on the big screen at the front every time, but also on their iPads with headphones on. They watch at their own pace, stop and replay parts they want to hear again.  The level of focus at these moments seems significantly higher than when we watch as a class. Any discussion I want to have can still take place at the end.

The fact that the iPad is the gateway to so much information offers great possibilities for assignment extensions for early finishers or even alternative routes for pupils struggling with one particular approach or assignment.

So all in all a positive experience generally. It’s an extra dimension, and extra opportunity, in fact I don’t really have the feeling that anything much has been replaced or lost by the arrival of the iPad in my art lessons. That though is not to say that there haven’t been some less positive aspects and downsides to this first year.

Everyone moving at about the same speed?

It was inevitable and easily predicted, but the way that all users, pupil and staff, get to grips with the new device varies enormously. We’ve offered lots of in-school workshop sessions to guide and instruct colleagues in various areas which have undoubtedly been useful, but it is fair to say that the staff members who are making the most progress are the ones who have stopped to ask themselves “what can I do with this new device in my lessons” and subsequently have had the drive to try and find some answers for themselves.

A series of practical problems……

Fortunately practical problems are often the ones that are the simplest to resolve, but they are problems nonetheless.

I’ve lost count of the number of broken iPad screens that I have seen this year. A twelve year old’s school bag would seem to be a dangerous place for digital devices.

Memory problems have increasingly become a problem as the year has gone on. For the pupils this has often arisen because of the games and other non-school apps that have been installed. But my 16Gb iPad Air is also constantly reaching the point of being full, purely with work related material. My advice…?, buy the biggest capacity that you can afford.

One of the big potential gains of iPad supported education is being able to connect your iPad to the large screen at the front of the class, be that a beamer, smart board or large scale LCD screen. Personally I have found this to be fantastic this year, conducting your lesson from the back of the class, or from sitting next to a particularly troublesome pupil! I can draw on my iPad and it appears on the screen, I am liberated from the computer at my desk.  Or at least I am if the connection between the iPad and the computer works well, and there lies the problem. We have huge problems throughout the school with this connection this year, a frustrating business!

The presence of all the possibilities the iPad offers, sitting there on the desk in front of pupils, is at times difficult to resist. All teachers are in the process of having to discover new ways to keep pupils on task.  In the art room I have to say my experience of this problem is relatively small, when we’re not actually using the iPad it goes away in the bag. Paint and clay don’t mix too well with such devices, but where lesson material and workbooks are all on the iPad it is asking more creativity from the teacher.

Maybe at the moment, my biggest disappointment with the iPad is the way that on the surface so called ‘creative’ apps are anything but creative.  So many of them offer a wealth of readymade solutions or ‘one-click wizards’ that might give eye catching results, but are the pupils actually being creative in making these digital products. This is a particularly interesting area for me, perhaps the most interesting of all the iPad developments in the classroom and it certainly warrants a more extensive post at a later date, how do we stimulate creativity with the device?

Time issues are a well-known problem in educationland, the arrival digital lesson opportunities requires extra work and a process of discovery that not all teachers are willing or able to embark on. School leaders should make no mistake, staff have to be facilitated in time and support is a school wants such a digital project to succeed.