Time to do what I’ve been encouraging my pupils to do all term, experiment and play a bit with their iPads.  A bit of pure iPad drawing.

For those interested in the technical details, it is made with Bamboo Paper to start with and then Brushes Redux.

I’ve posted before about the commission that I’ve been working on this year. A piece involving three canvases that together are close to four metres wide. This week finally saw the installation of the work in their new home, the Max Planck Institute for Psycholingistics in Nijmegen.

You never quite know how artworks are going to look in a new location so it is always just a bit of an edgy moment when you pull them out of the packaging and lean them up against the wall and step back to look. On this occasion the result has proved to be undoubtedly a move in the positive direction. The work itself of course hasn’t changed, but the location it has received is on a beautifully spacious white wall that is positively flooded with light. I could have asked for little more, the three panels do look, even if I say so myself, beautiful.

The paintings were given an official  presentation moment on Wednesday afternoon, along with the also recently purchased work by Alex Dima. It was a chance to thank those involved, but also a moment to say something about the ideas and intentions behind the paintings. I am always a bit wary to say too much in such circumstances, I don’t want to give the idea that there is just one route to go. However I am also keen, if I can, to offer the viewer a way into interpreting the work. On this occasion I chose for a short poem, it touches on a number of ideas and reference points that have been important whilst creating the work, but does so in a way that hopefully opens doors to interpretation rather than closing them.

I do not pretend to be a writer or a poet, but I have to admit to being quite satisfied with the resulting three verses, it was certainly well received at the opening!

I look to the landscape

The backdrop of our lives

A rush of wings

Refined beauty in our man made line

Engaging the serene beauty beyond

Illusions in the décor

A rush of wings move the air

Lost in the colour

The fourteen and fifteen year olds that I teach are in the process of starting to think about their so called ‘profile choices’, the point in their journey through secondary school where they can drop a few subjects and possibly choose one or two new ones.

In the Dutch cont

ext where I teach, it is a relatively small range of possibilities that they select from, at the end of it all they still have a timetable with between eight to ten different subjects. As far as future university studies or career choices are concerned a great many options are still open with such a broad knowledge base. Yet somehow the message that seems to settle in the minds of the pupils, partly through the input that they get from school and partly from family and friends, is that even at this early stage they are stepping onto the rails that will lead them to their future chosen career.

I have to admit to having some problems with the system that creates the impression within the minds of the pupils that they are somehow choosing a future career at the age of fifteen. This degree of certainty is something of an illusion, there are so many twists and turns on the educational road ahead, coupled with the fact that the nature of work and employment is in such flux, that many jobs and employment opportunities of the future are unimaginable to us when viewed from the present.

But actually my bigger problem with the message that seems to be getting through to the pupils choosing their subjects for next year is that every choice should be related to simple career perspectives. Choosing a subject because (a) you simply enjoy it or (b) it may contribute to your development as a person or even (c) because it allows you to use skills you seem to have that other subject areas ignore all are largely ignored in the whole process.

Neither education or life are linear processes where everything fits so neatly into one career game plan. It is an illusion to think that it should. In addition to this education should be seen as a more holistic process. We have a role to play in shaping the individual and creating balanced and broad minded citizens for the future. We need to value and nurture the variety of skills our young people have, encourage them to use and develop them all. Our educational systems have a tendency to value only academic development, neglecting the social, creative and expressive.

Almost as if to illustrate the way in which career choices in the real world have a tendency to twist and turn in unexpected ways I listened yesterday to a talk given by an ex-pupil of our school to the very same pupils I had been talking to about their selection of subjects to earlier. She left the school some twelve years ago to study law at the nearby University of Tilburg with ideas in mind to become a criminal lawyer, as she put it herself, “like you see on the tv!”. However, due to people she met and elements of the courses she followed her interests started to broaden and take her focus to unexpected areas. She has now worked for the Dutch ministry of Defense and NATO, being particularly involved in projects that focus on the place of women and children in lands that have been effected by conflict and has taken her to various places including extended placements in Afghanistan.

I’ve been working for a year and a half with an iPad in classrooms of children all similarly equipped.  It’s been eighteen months of leaps forward, steps backwards and occasionally periods where I’ve pondered hard as to how best to implement the device into my art lessons.

I should say that I have approached the digital developments with considerable openness, I’ve been part of the steering group at school and I’m quite digitally literate. Added to this the background of my own
arts education taught me always to look and think broadly about methods, tools and materials that may be on offer. A kind of ‘consider everything and use what works for you’ approach.

my lessons and teaching materials. Whilst many of my colleagues have encountered problems with materials and apps provided by educational publishers, in the art department we have always been used to developing our own material and deciding exactly which route to take independently. In this way I’ve discovered apps that are useful and of an appropriate level for the twelve and thirteen year olds that are working in iPad classes up until now. Up until now that’s Brushes Redux and Bamboo Paper for digital drawing activities, iMovie for a film and the extremely versatile Photoshop Mix for digital collage.

This last one, Photoshop Mix, raises an interesting point. I could see that this undoubtedly was a fantastic app that suited 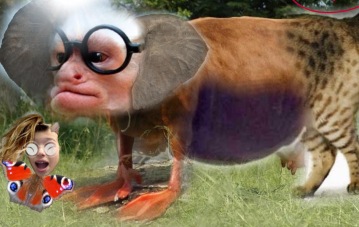 my needs perfectly. However I was rather worried that the complexity of how it worked and the technical opportunities on offer were simply too great and my class of twelve year olds would struggle to get it to do what they wanted. But as it turned out the lesson was a fantastic example of peer to peer driven teaching and learning. Each new technical discovery made by me or any pupil seemed to spread rapidly around the class. By the time it came to hand in the work it was clear that everyone had grasped the content of the assignment and the technical possibilities offered by the app. A note to self, be careful not to underestimate the abilities of the pupils!

If there is one area of concern in all my iPad activities it is undoubtedly a question of how far I can go in saying that I have full confidence in the device to fully function in the way intend it to when leading a lesson.  Lesson situations have adversely been affected by issues such as linking my own iPad to the screen at the front of the room, pupils not being connected correctly to the cloud to allow full use of some apps, Internet connection issues and so on.

On the surface many of these sorts of problems are relatively small and definitely solvable. However, when you encounter them unexpectedly, even if the problem only effects a couple of the pupils in the class the disruption to the main task of the lesson can be extremely significant. It is also all too evident that bad experiences count and weigh heavily on the mind. If you don’t feel confident that your device (an iPad in this case) is going to allow you to simply get on with what you intended to do, is it not better and safer simply to fall back on what you know and have always done and put the tablet back in your bag?

It is a phase that a digital school has to go through perhaps, kind of painful and frustrating at times, but something that has to be experienced a worked through. To do this you obviously need the right technical support, but you also need enthusiasts willing to take chances and experiment, you need leadership prepared to lead by example and to commit to broad digitalization projects and who can take their whole team with them. But maybe above all you need time and patience to develop that all important trust in device and its role in the new classroom possibilities that it offers.