Stimulating a point of view is important in an art lesson. I guess I would often say that in a way having a point of view or and opinion is almost as important as the opinion itself. In this regard maybe my subject area is a little different to many others, being in absolute agreement with the ‘right answer’ is not normally the main aim in the art room.

But even in the ‘hard’ science areas there is room for discussion and opinion, certainly when exploring a new area or theme and when you are trying your best as a teacher to unlock pupils’ prior knowledge and intuitions. This can be done in a number of ways in the classroom, a group discussion, a brainstorming session on the board or individually or something as simple as providing pupils with key terminology and asking them in a group to discuss what they think the words might mean.

The following activity is designed to: 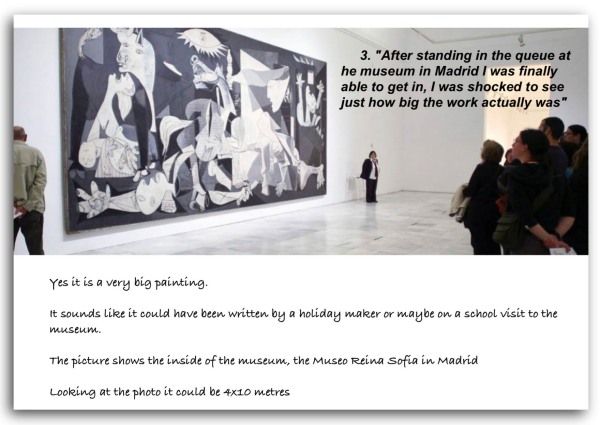 The instructions below are for how this assignment might work in my art lesson, but by switching the artwork image for a different sort of image, diagram or film with different subject matter the basic principle should work across most subject areas.

Select the artwork. For the purpose of this example let us use the example of Picasso’s Guernica. If you’re not sure about the history and importance of this artwork take a quick look at some background information here.

The overall benefit of this structure is that it allows you the teacher to steer the engagement with the lesson material into desired areas though careful choice of the ‘quotations’ that you present to the class. However it requires the pupils to do the work in these areas as they engage with, and reflect on the different perspectives that can be taken in relation to a single subject.

The results of the assignment could easily be taken further and used as the basis for a more extensive written exercise relating to the theme.