A while back I wrote a couple of posts about an internationally orientated photography project that I was working on with my art teacher colleague Pasi in Finland. I have never really written a reflection on how the process went, although I think both Pasi and I already have a pretty good idea about the strengths and weaknesses of the setup we had.

The project placed its emphasis on several key points:

There were several elements to the projects that we drew up, including the analysis of various forms of portrait photography that we encounter in our modern lives, from the selfie to the school photograph and the celebrity photograph to a wedding photograph. Pupils were also asked to look at images of power in a photographic sense and draw comparisons with how our politicians and leaders present themselves when looked at alongside painted portraits from the past.

But perhaps the most complex and engaging part of the project involved the Finnish pupils writing 200 word descriptions of photographic portraits made by contemporary Finnish photographers and my pupils doing likewise with Dutch examples.

We ended up with descriptions such as this:

The length of the photograph is a bit longer than the width. The background is completely black. The back of the person is touching the left side of the photograph. The person covers a little bit more than the left-half of the photograph. The head of the person is almost reaching the top and the body is cut off at the chest. We can only see the right side of the body and face. The female is looking down. She is wearing a black shirt with a v-neck so, we can see her right collar bone. The black shirt blends in with the background so we can’t really see the edges of the shirt. She is wearing earphones; the wire is underneath her middle finger and on top of the other fingers. Her hand is positioned relaxed in her chest. Under her left sleeve, we can see a little bit of her watch. She has dark-brown curly hair braided in a Dutch braid on top of her forehead, which becomes darker and blends in with the black background. She might be listening to classical music I think. She’s wearing an earring in her right ear. The light is coming from the bottom right corner, there’s shadow in her back and the rest of the left-top. The darkness is important in the picture, the picture is very dark and the face is very light. Her face is neutral and she isn’t smiling.

In this case written about this photograph by Dutch photographer Suzanne Jongmans.

The text was then sent off to Pasi’s school where a pupil then set about remaking the photograph without ever seeing the original and only having the short text about it to work with. The resulting pair of photographs looked like this with the Suzanne Jongmans photo on the left and the pupil’s work on the right: 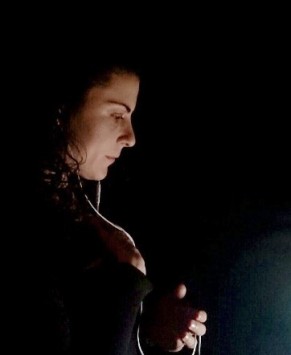 It was a fascinating process not least for the big ‘reveal’ at the end where pupils get to see the original that they have been trying to reconstruct, and indeed the results that others had made based on the text that they had written.

In some cases, a number of photographs were made by different pupils using the same description, a process that showed further how language and interpretation played a significant role in the process.  The link below takes you to more extended documentation of the project:

For me, the most interesting part of this whole process is how it opens pupil’s eyes to the use of different forms of language in communication. The limitations of text and description often become quite visible and obvious to the pupils in this way. Their descriptive texts often aren’t nearly as absolute and concrete as they thought. Misinterpretation and misunderstanding is at times highlighted, which can certainly provide good learning experiences.

Alongside this is the more visual language of photography, the images we used were so much more that ‘just photos of people’. Each told its individual story, gave us a view into a real or maybe constructed world and highlighted the whole series of decisions that a photographer makes when setting up, framing, lighting and directing their subject before finally taking the photograph. This was of course a series of steps that the pupils could experience for themselves when making their new versions of the originals.

2 thoughts on “Photography, language and communication (a clil assignment)”