I don’t write posts often about the adult groups that I teach. I’m not sure why, it’s certainly not because they’re not interesting enough, on the contrary, they often throw up the most unexpected things as the very first post I ever wrote for this blog points out:

When the cat’s away…

Over the last few years I’ve taught one particular group that has grown into a very productive and sociable Thursday evening session.  At the moment, it is a group of around fifteen, ranging in ages from early twenties to around eighty. Many of the group have been following the lessons for six or seven years and in that time, have been open to trying any sort of assignment that I throw to them. 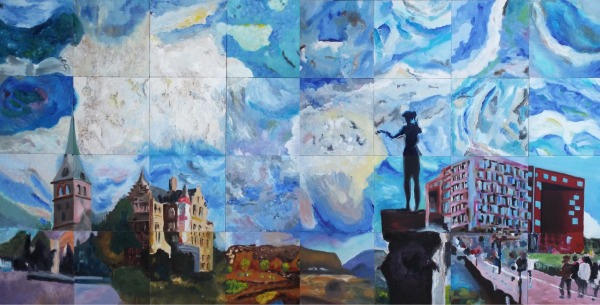 We talk about art a great deal, I help them with technical and content challenges, we laugh a lot, especially when I stumble badly enough in a Dutch sentence…. yes, even after twenty-five years here that does still happen!  There is also something of a running joke about how I, once every couple of weeks, come with a new assignment, they all listen carefully and then they all go and do something else.

All in all it’s become a group of friends who paint together once a week. Each summer I make a book of photographs of some of the work that has been produced the previous season as a kind of record of where the group are at that moment.  The one thing that we’ve never done though, is to have an exhibition of paintings in a public space. Until that is, this week. Today I spent the morning with Nynke, one of the group, installing an exhibition of nearly thirty-five paintings in the exhibition space of our local library.

The exhibition includes a variety of paintings including a large group painting that marks a number of the recognizable landmarks from our town of Wageningen in the Netherlands.

4 thoughts on “Finally after seven years an exhibition”