You learn a lot from trying something for the first time with a class. An idea that was so clear in your head seems to create confusion or uncertainty in those of your pupils. Or something that you planned to fill just a couple of lessons takes three times as long to complete. This was one such assignment, one that has many good aspects to it, but when I experimented with it for the first time two years ago, I knew afterwards refinements had to be made.

The project is a really nice blend of language and imagery that comes together to produce a final piece of work that has considerable space for the pupil’s own ideas, has strong compositional challenges and can be completed with figurative and/or abstract elements. A full description of the working process can be found here.

The problem I had with the results last time was the language element. I remember at the time perhaps being in a little bit of a hurry to get onto the practical work. As a result, the language part (that comes first) didn’t get enough time and, dare I say it, a not critical enough push from me. The results were in the end reasonable, but the language output simply wasn’t as poetic, imaginative or grammatically fine-tuned as I had hoped. So this time, these were the areas for focus. 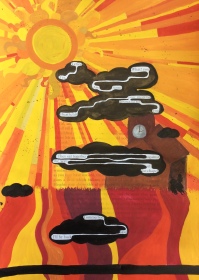 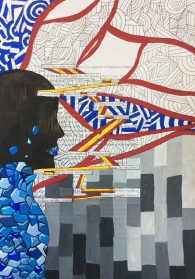 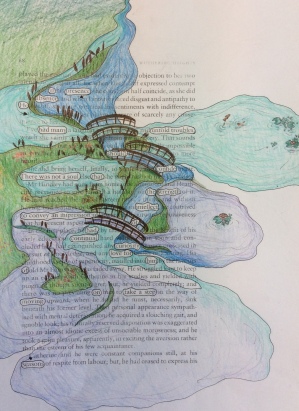 It’s an interesting challenge for my groups of fifteen year olds learning in English (their second language). I delivered them each a page of Wuthering Heights ask them to create something new with a selection of the words that are on the page that they have been given and obliterate the rest, or at least cover them over with their design work. It could result in a new and very concise new narrative, it could be a collection of phrases that read like a poem or the lyrics of a song, it could even result in a series of profound statements. But whichever direction they choose the text should be clear, make sense and be grammatically correct.

I did hammer on a bit about the grammatical criteria, but it did pay off. The results this year are definitely stronger in this area. Emily Brontë’s pages have been turned into something really quite different. The visual design is eye-catching, but the textual puzzle of sentence creation using limited means has produced some intriguing results.

I used to love him I cried heartbroken.

I guess he would rather have her arms round his neck.

Will I miss him? I asked myself half angrily.

She, a woman, our mistress had said, it was nothing less than murder in her eyes, she kept aloof, and avoided any alliance with him.

Three years subsequent to my inclination, I was persuaded to leave, but tears were more powerful when I refused to go.

He wanted no women he said, no mistress.

I kissed good bye and, since then a stranger I’ve no doubt.

Those you term weak shall fight to the death.

Have faith I advised her, value him more, melting into tears and delighted she replied.

He is too reckless, doesn’t trouble himself to reflect on the causes.

Talk about anything, amuse me.

The accursed boy’d never know a dark absence would lavish the whole place in words of silence.

As it persisted he cried, oh friends run away from me.

When teaching a second language through the content of other subject areas, art lessons in my case, the production of language rich output from the pupils is often an important part of the learning strategies used. One day we might focus on written output and another on verbal. Both are important aspects of language acquisition and use. 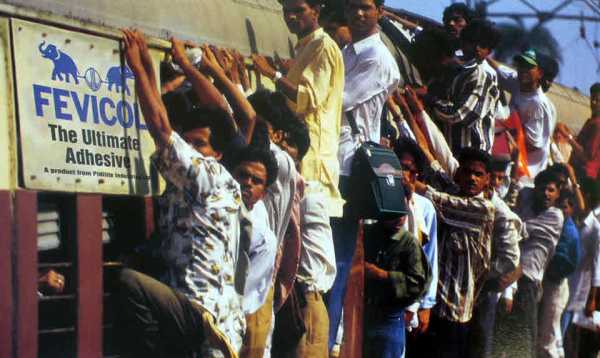 Within a standard language learning situation the focus is often placed on issues such as sentence construction or grammar. Within my own branch of language teaching, the CLIL classroom (content and language integrated learning) other elements are given increased focus, such as subject specific vocabulary, ensuring the pupils have a mastery of subject themes and terminology.

This is all well and good, but personally (and creatively) I want to take the output one step further and ask the pupils to take the creative steps that I expect of them when we are drawing or painting and make similar steps in terms of language.  In a sense I say to the pupils;

‘OK, you have a certain knowledge of language, now what can you do with it in terms of communication and creativity?  How can your choice of language output engage, communicate and grip the reader?’

I’m exploring this very idea with my third year class (14-15 year olds) at the moment. We are going to be looking at how printed and digital advertising makes use of the way image and text can be combined in an unexpected and maybe slightly surreal way in order to help sell a product. The language output is initially likely to be in the form of discussion based around some examples. But really my attention is more on that question of how can well-chosen words be used to communicate in the form of a slogan or attention grabbing phrase.  Whichever route is chosen,  a sharp and concise text is required. It asks the question of the pupils what can you do with language, how can you use it, and in this case use it to activate an image in a particular way?

This challenges the pupils in a number of ways:

Let’s get one thing straight from the beginning, creating advertising imagery and text writing is deceptively complex and difficult. In some ways it is like coming up with a joke, we can all recognize and appreciate a good one when we see or hear it, but coming up with one of our own is completely different matter! It is not without good reason that businesses employ expensive advertising agencies to help them with this problem.

It is all about framing the assignment up in such a way that it leads the pupils in down the path you want to explore and still offer scope for their own ideas and creativity.

I provide the pupils with an image from advertising. An image that has been lightly photoshopped in order to remove the text or slogan which activates the image in terms of bringing image and text together to promote the product being sold.

The pupils are also given the necessary information as to what the product actually is, if indeed it is not clear from the image. The challenge after that is simple, working in groups they have to write their own adverting text, one that engages and activates the existing image.

This whole project comes on the back of a series of lessons about the art of Surrealism, so I certainly encourage a slightly surprising and out of the box line of thought.

What does this require of the pupils?

In practice this might only be a few words, but that is all the more reason to be critical in producing a truly fine-tuned phrase. Below are a few examples of the resulting pupil work, along with the original texts from the advertisements.

Original text: Wherever you get a stain

Original text: The challenges to a Paralympic athlete are always bigger

Original text: Because dogs don’t always have it easy

Like when working on a drawing, pupils have to remain switched on to working with care, correcting where necessary and above all trying to stretch and refine their language output, both in terms of the verbal discussion of possibilities in the group and the small, but hugely significant written output that follows.