To celebrate the 50th anniversary of the first manned landing on the surface of the moon Ely cathedral had organized a science festival. I made a rapid visit to the UK this weekend and had a chance to take in a concert at the cathedral and see Luke Jarram’s installation work (it would have been very difficult to miss it).  An approximately 1:500,000 scale replica of the moon, lit from the inside was suspended in the nave, just short of the central space under the cathedral’s octagon. The seven meter in diameter inflatable made for a very still but hugely eye-catching intervention in the space. 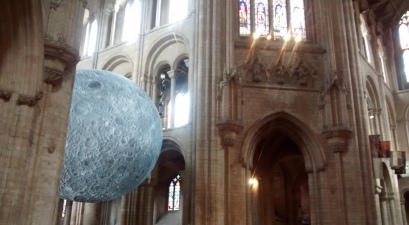 The human eye has always had a prominent role in the history of art. A statement of the obvious you might say. The tradition of the portrait has been such a prominent feature in art for so long and can indeed be traced back to ancient Egypt. The eyes of a subject are more often than not the focus. The eyes are, as they say, the windows on the soul. The arrival of photography brought new challenges for artists, but even within the modern chapter of art history it has remained relevant and extensively explored.

But here I am less interested in the tradition of portraiture, and more in the eyes, or maybe even ‘an eye’ when it is taken in isolation. The singling out of the eyes, or a single eye, reached something of a peak in the art of the end of the nineteenth and the beginning of the twentieth century and the work of the Surrealists in particular. 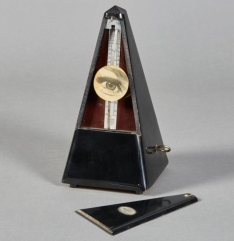 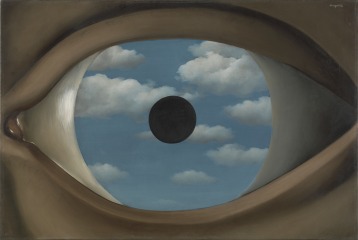 Odilon Redon was more than happy to remove the eye from the human face, to isolate it or combine it with other objects or contexts. Rene Magritte and Man Ray also produced work that see a one-eyed stare coming out of their canvases. And then there is the unforgettable eye sequence in Un Chien Andalou, the film made by Luis Bunuel & Salvador Dalì, a reference that is certainly not for the squeamish.

The eye, as a sensory organ, is of course a crucial to the artist both in terms of perceiving the world around them and realising their own creative work. Without vision, the artistic practice becomes massively restricted. Added to this, we experience our eyes as both tremendously fragile and vulnerable in comparison to much of the rest of our body. These sorts of reasons contribute perhaps to the eyes place in the history of art.

Having made these observations I’m not altogether convinced that these are the motivations why the eye in the drawings of teenagers is at times so extraordinarily prevalent. I have just finished an extensive session of marking of final school exams, where candidates (18-year olds) have documented their working process and drawings that have moved them towards final pieces of work. What has undoubtedly caught my eye is just how many eye paintings, drawings and doodles I have seen. 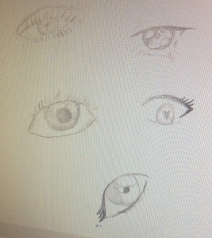 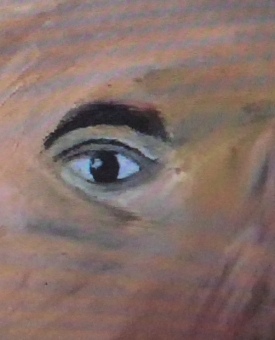 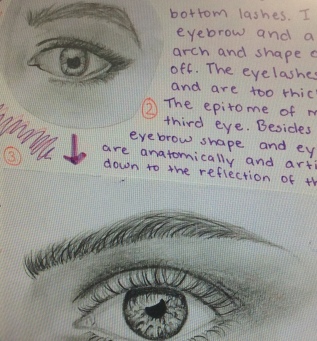 Maybe it’s not that surprising that YouTube has rather more films about drawing eyes than they have for drawing ears. But what is especially noticeable in the exam candidates’ works is how often the eyes are isolated from the face, so not as a form portraiture, indeed very often they are just a single eye.

Have I got some great theory forming here? Well no, not really. More likely just more questions relating to the subject. Is this more prevalent amongst girls than boys? Is it connected to a fascination in Manga and Anime illustrations with their enlarged eyes? Or is it simply because it is relatively easy to do in comparison to a complete portrait? Do these eye drawings carry some form of symbolic meaning for the young artists involved?

One thing is for sure, they don’t seem to be being made with any great knowledge or insight into the artists’ work that I mentioned earlier, which is a shame, because a little more development of an idea around such a motif, can make it a great deal more interesting, certainly when it is the 137th exam candidate that you are marking!

Some of my first years (aged 12) have truly transformed their artistic ability this year. It is almost like they’ve developed a completely different artistic soul……which may well turn out to be an extremely accurate evaluation of the situation.

The pupils concerned handed in a homework project yesterday that they had been working on for the past month or so. I was an assignment that involved a little internet research, writing a short text and producing two drawings.  I flicked through the folders afterwards and two in particular caught my eye.  I’ve watched the two boys concerned struggle with their drawing capabilities over the last year.  I’ve pushed and encouraged, there has been some progress, but generally quite small steps. Below are two drawings that the pupils made while we were working on a monsters and gargoyles project earlier in the year.  The paper is filled, the drawings quite unrestrained in their character and the shading is, well lets be positive, quite expressionistically done. 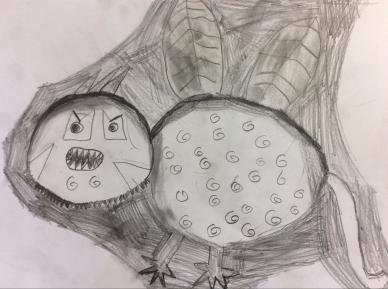 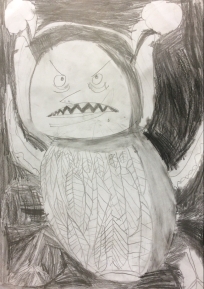 Perhaps I should also mention that the drawings were done in class.

So back to the project.  The main drawing assignment was to take a flower or small branch from a tree and lay it on a sheet of white paper and make a pencil drawing of the plant form and shadow.  We didn’t spend time practicing this sort of observational drawing in class, although I did give a little instruction about filling the sheet and trying to make full use of the range of greys that your pencil offers.

The same to pupils from the drawings above produced these drawings: 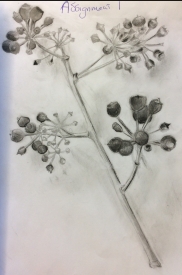 Something quite remarkable seems to have occurred.  As the art teacher, I would like to claim that my pupils have suddenly become so much more sensitive in the use of their materials.  But the truth is of course, these drawings are not made by the pupils concerned.

Now there is nothing new in parents or older siblings helping with homework.  Generally, a parent who helps and explains with a difficult piece of maths should be applauded.  It is also true to say that the same parent who goes that little bit further and fully solves that especially tricky equation for their child will generally pass by unnoticed. But with art homework it is all rather easier to see.  The question to those who have helped here is simple, do they really think that I can’t see this?  I feel a comparable drawing assignment that we will work on in class may be the way to resolve this, maybe there will be a third pair of drawings added to this post later……….

Rembrandts paintings are such big statements. Last week I was in the Mauritshuis in The Hague showing the pupils I teach The Anatomy Lesson of Dr Tulp. Today I’m in the Rijksmuseum with it’s Syndics of the Drapers’ Guild, the Jewish Bride, the portraits of Maerten Soolmans and Oopjen Coppit and of course also the Nightwatch. All familiar images that I regularly see on my visits to these museums.

But today it has been slightly different, for alongside the big statements there are images of such delicacy, intimacy and plain and simple smallness.  For its exhibition Alle Rembrandts the Rijksmuseum has pulled everything out of their storage depot, all the paintings, all the drawings and all the prints. 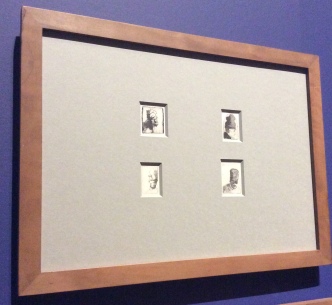 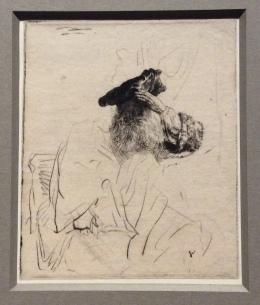 The drawings in the exhibition are often quite limited in their format, a page from a notebook perhaps, but the etchings, peeping out from their little windows cut in the generous mounts are something else.

Rembrandt captures a look, a glance and a mood, often in little more than a square centimeter of surface on the etching plate given over to the subject’s face. A individual peers out from amongst a tangle of the most finely scratched lines.  Faces lit by the combination of the blackest of black printmakers ink and the raw bloom of the slowly discoloring paper.   Never mind the impressive clothes and stature of the full size, full figure painted portraits, these are openings into the lives and world of emotion, concentration, activity and sometimes, apparent boredom.

And then after this simplicity and intimacy, you enter the last rooms. These are spaces packed with drama and spectacle. Rembrandt sets to on the big Biblical themes; the crucifixion , the entombment, Christ presented to the people and Christ preaching. They’re bigger prints than earlier in the exhibition. They bristle with action, the handling of tonal work is, well, as you might expect from Rembrandt, dramatic. I haven’t seen some examples of Rembrandt’s crucifixion series for a while, it is spectacular and fascinating to see different stages of the printing process alongside one another.  Having seen Grunewald’s huge crucifixion not so very long ago, I do find myself wondering how a Rembrandt painting of this subject, based on his etchings, and of Nightwatch scale might have been.

I first visited the Boijmans van Beuningen museum in Rotterdam early in 1989. The occasion was a cultural visit to the Netherlands with a group of college friends from Wimbledon School of Art where I was studying at the time. We couldn’t afford to join the official college trip to Madrid and Barcelona, so we put together a cut price excursion of our own, visiting the nearer to home delights that the Dutch museums had to offer.

Over the years I have returned to the Boijmans on countless occasions to visit the permanent collection and a variety of temporary shows. But today’s visit on 2nd May 2019 is going to be the last for quite some time. The museum is about to undergo a major renovation and refit that is scheduled to take seven years. Such projects though do have a tendency to run out; just how long was the Rijksmuseum in Amsterdam closed for for its rebuild?

It is a slightly odd feeling that a museum that I know so well is simply going to be unaccessible for so long. But if I’m honest, maybe it really is time to bring the museum up to date. Museums have moved on a lot in the last twenty years. How they look and what they offer as an experience has changed and the Boijmans has perhaps got a little left behind. 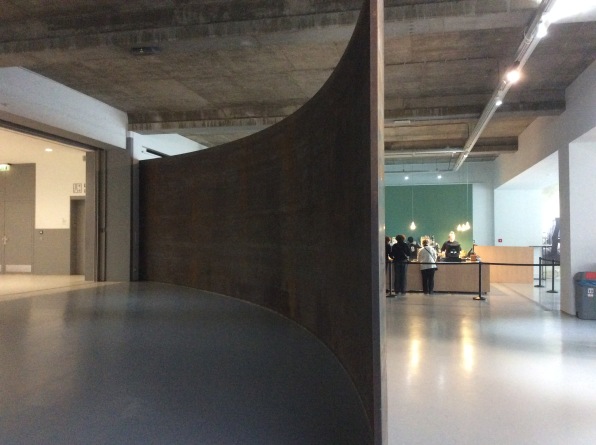 The museum has a large and diverse permanent collection. It perhaps deserves an updated space to be displayed in. One of my own personal favourites certainly could do with a new home. I remember the two interior curved and slightly rusting steel arcs by Richard Serra from my early visits to Rotterdam. They slice through the space of a street level gallery. Nowadays these industrial scale interventions feel more like part of the interior design of the café with which they have to share the location. 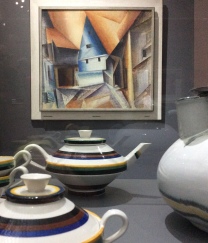 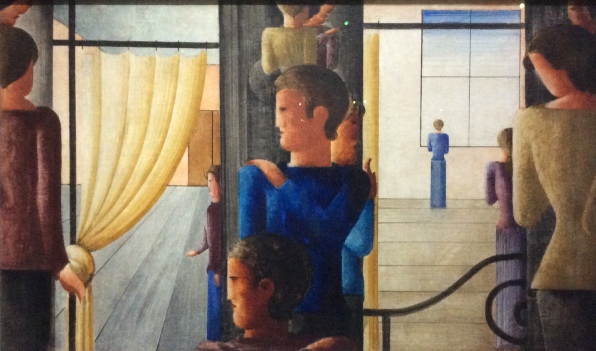 So as the museum draws towards its temporary closure it ends with an exhibition about the Bauhaus. A celebration of the 100 years since the influential German school was set up and the ways it connected with the Dutch art and design world of the time. Presumably the museum won’t be reopening with a show celebrating 107 years of the Bauhaus or worse still 110 years. But that does some how put into perspective, just how long the museum is closing for.