It’s heading towards the end of the year.  Sometimes you have to work a little harder to hold the attention and keep the motivation in the classroom.  H2Q are such a class.

I see them for just 60 minutes a week.  They are chaotic, at times noisy, very socialable and generally very likable bunch.  But given the right challenges this group of twenty five 13 year olds can be focused and engaged with what they are doing.  Sometimes this year I’ve been spot on with an assignment, and at other times less so.  It is often difficult to predict what will hit the mark.

The last couple of weeks we’ve been working on an animation project.  The iPad’s that I have at my disposal certainly help here and the app Folioscope is great in offering enough possibilities without the kids becoming overloaded and confused by the choices on offer.

We took our inspiration for the project from Rhubarb and Custard, and old BBC animation that made use of a fairly course, but extremely lovable, drawing style.  Apart from that though it was an open door, the pupils could approach it how they liked.

The result, two lessons later, apart from a whole set of animations similar to the two below, was a surprisingly quiet classroom.

It’s a bit of a trip for us to get the De Pont in Tilburg. Half an hour on the bike, ninety minutes in the train and fifteen minutes walking from the station in Tilburg. But such expeditions are peanuts in comparison to Richard Long, who is currently exhibiting in the museum. 586 miles (943 km) in eighteen and a half days across Southern France and into Italy, between Bordeaux and Turin was one such outing. Various text installations documenting Long’s walks formed a significant part of the exhibition, but the major spaces were dominated by the geometry of his stone installations, with crosses, circles and columns of raw or cut stone stretching out over the museum’s cool white spaces. 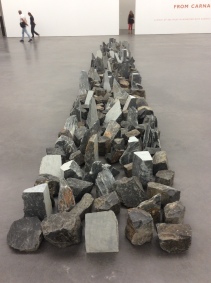 Long’s work has a longer history in De Pont and fits in well with the curatorial style of the museum. Geometry and a certain leanness visually are often returning features in the exhibits. A fact seems particularly underlined at the moment by a number of other works on display, repetition, grids, rows and symmetry abound. It is very much an aesthetic that appeals to me and I don’t hide the fact that I myself often work in series producing rows of variations on themes. It is simply my way of doing things and so a visit to De Pont always recharges my own visual batteries and leaves me ready to work again, this time sent on my way by the likes of Gerhard Richter, Roni Horn, Ann Veronica Janssens, Jan van Duijnhoven and Sean Scully. 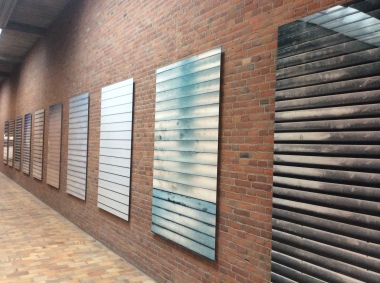