I rounded off my attempt at language learning at school with an O level English (GCSE) grade C. I always enjoyed my English lessons, it’s just that I never felt very good at them. I was a slow learner, didn’t read a novel until I was nineteen and often muddled up words. With that in mind, that grade C perhaps wasn’t too bad.

Yet, through the course of the years I have ended up becoming a language teacher through the back door as it were. First and foremost, I consider myself an artist and art teacher, but increasingly I realize that my engagement through language, via the artistic route in a playful and creative way has rather become my thing. Could it be that my earlier struggles with English at school, followed by my struggles to learn Dutch when I moved to the Netherlands has actually made me a better language instructor? Maybe, it certainly gives me an empathy and understanding of how my pupils must, at times, feel.

But perhaps more significant is the robustness and self-belief that it has built…..a kind of ‘the things that don’t kill you make you stronger’ philosophy. I notice it in my pupils. Teaching them through immersion in the target language, especially at the phase when they are struggling to keep up with the language being used, isn’t a comfortable feeling.  At times it is well outside of the comfort zone. But it is getting past this and the feeling of achievement that accompanies it that is, the not insignificant by-product of learning language through immersion. With it comes a new found confidence and belief.

I was reminded of this a few weeks ago when I presented a workshop about innovative approaches in content and language integrated learning (CLIL) situations. Much is said in education about the search for teaching methods and practices that challenge our pupils. The argument being that challenge the pupils and they will respond with an increased motivation to learn. It is a compelling argument, especially when you see just how much of a language a 12 year can master in the course of a year of bilingual education.

Maybe, just maybe, if I had had the luxury of a bilingual education in my teenage years, I might be a little less surprised about having become, rather accidentally, a language teacher of sorts myself.

Sometimes all you can do is laugh when you are starting to teach a bilingual class using a CLIL (content and language integrated learning) approach. I have a class of Dutch twelve year olds that I have been teaching my art lessons to, essentially in English, for three weeks now. It’s going OK, but obviously there is still a long way to go and a lot to learn. This learning situation does occasionally throw up funny moments…. 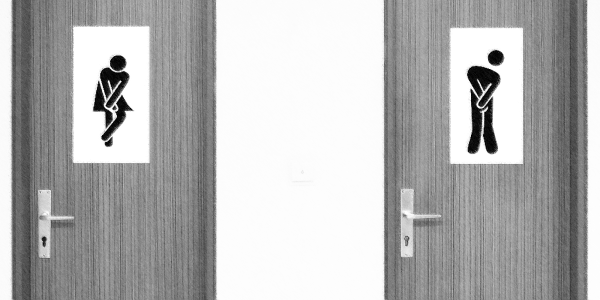 A boy comes up to me near the end of the lesson, pauses, and then carefully asks in his most considered English:

He’s only a first year so we won’t have the “can I” or “may I go to the toilet” discussion, not just yet. I look at my watch, only two minutes to go until the end of the lesson. I reply slowly and clearly:

“There’s only two minutes to go until the end of the lesson, can you wait two minutes?”

He listens carefully to my answer, a serious look on his face, and then smiles and runs out of the door, down the corridor and disappears through the toilet door without saying a word.

The first weeks of bilingual education is full of this sort of misunderstanding, it requires patience as you laugh inwardly to yourself and think “didn’t I just say that?” or “haven’t you been listening”. The truth is that they probably have been listening, it’s just that joining up the gaps in their understanding is sometimes just that little bit too challenging. That will change though, and soon……..

Rows of poplar trees have had a place in the Dutch landscape for many years, often in hard straight lines cutting across the fields or following a road or lane.  The poplar though as a tree is it would seem, losing its popularity and the rows of spectacular verticals set against the horizontal landscape are increasingly being removed. 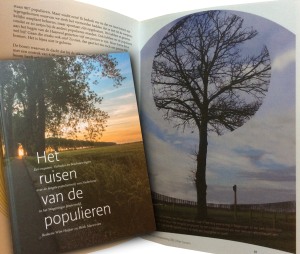 Near where I live in the centre of the Netherlands one of the most spectacular avenues in the country is living on borrowed time. Some 900 trees are due to be removed over the next couple of years.  The landscape on the edge of the town of Wageningen it is fair to say, won’t be quite the same without them.  Writers, artists, photographers, runners, birdwatchers, sound recordists and others have contributed to a new book that reflects on the trees, there presence in the landscape, their importance to us and ultimately what their removal will mean to us. 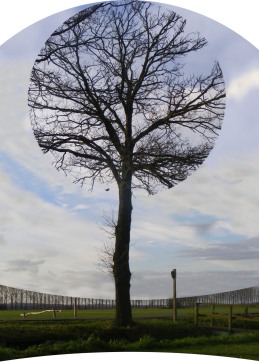 Wim Huijser and sound recordist Henk Meeuwsen have taken the lead in assembling the book, but I too have contributed to “Het ruisen van de populieren”, or in English, “The Rustle of the Poplars”.

There can be few landscapes around the world that are as manipulated and carefully managed as the Dutch landscape.  The presence of man and the control he exerts is almost always present, sometimes subtly, sometimes in a more extreme form. My manipulated photograph for the book connects with this and the way the landscape forms the scenery for our lives.

Establishing clearly defined areas of creativity when working with young people is something I’ve posted about before, it is something that, as an art educator I feel quite strongly about. This week I’m being reminded about again through an assignment that I have set.

The assignment is part of a photography module that I am working on with my fourth year class (15-16 year olds in the Dutch system of education). We’ve spent time in the lessons looking at examples of good portrait photography, the pupils have compared photographs and written about them.

This is a generation that take so many photographs. This is fantastic in so many ways, the freedom to experiment, the minimal cost involved and the ease with which they can share their creative discoveries. The big down side though is that they rarely stop to think about what it is that they are doing, everything is a snap shot, instantaneous and so often just for amusement purposes.

With this in the background, it is actually often quite difficult to get the sorts of photographic results that you might hope for. The assignment that I have been experimenting with is essentially a portrait assignment, not so much about ensuring that the portrait photograph discloses something about the subject, it is simply more about encouraging the pupils to look carefully and critically at there’s on that they are photographing, consider how they are framing them up and how that they are controlling light.

The assignment is based on an idea that I came across on the www.booooooom.com website although I have also seen work by other photographer doing similar things, such as the Dutch photographer Hendrik Kerstens.

For the project I gave the pupils a selection of five Vermeer and five Rembrandt portraits to use as a basis. They simply had to create their own photographic versions of the portraits. It was not so much about dressing up or gathering attributes to fill the picture, but more about creating the ‘look’ of the painting, simulating the glance, creating a comparable composition. 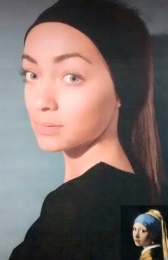 By allowing the pupils to play the role that the original offered seems to have removed a lot of the self-consciousness that might otherwise get in the way. They step in front of the camera knowing what they have to do. The endless possibilities that the camera normally offers is framed within some limitations, but these limitations allow the chance to focus on the issues I want them to focus on. This is the strength of the project I feel.