Contrast is important in art.  An intense black and white drawing by Seurat, rice colour contrasts in a Van Gogh painting or a lonely or an isolated Anthony Gormley figure in the vastness of the Thames and London skyline.  But I have rarely visited an exhibition where contrasts of content have collided with such directness as the Belgian artist Wim Delvoye that is currently at the Noordbrabantsmuseum in ‘s Hertogenbosch.

There are sparkling laser-cut steel used to rebuild Gothic cathedral architecture into the form of cement mixers and dumper trucks. Heraldic crests are displayed on ironing boards and gas cylinders decorated to make them look like they are constructed from Delftsblauw ceramics, and that is just in the first room of the exhibition.

Throughout the show the work displayed is playful, at times mischievous but always immaculately made.  The collisions of content that Delvoye manipulates are carefully considered and combined visually is a way that captures the attention, draws you in to look closer and in doing so encourage you to give the work the time it deserves.  The intricately carved forms cut into heavy duty tires, tattooed and flayed pigs’ skin or the bent, reformed and twisted crucifixion sculptures, there is a great deal to see and think about.

While I’m not sure that Delvoye’s work will find its way directly into my own creative practice, but I have previously used a little of his work in my lessons and I can certainly see myself extending that.  A series of lessons I give on surrealism and surreal combinations of two objects really seems to be crying out for his input and influence!

There is a very strange double bill of exhibitions in the Noordbrabantsmuseum in Den Bosch, the Netherlands. Both, in their different ways, lean heavily on the artworks of Dutch masters from the past. British fashion photographer Tim Walker presents a series of larger than life photographs that take as their reference point Hieronymus Bosch’s painting The Garden of Earthly Delights. Meanwhile, in the neighbouring galleries there is The Loving Vincent exhibition, a display of a cross-section of the thousands of paintings made for the Hugh Welchman and Dorota Kobiela film of the same name. To say that these lean heavily on the work of Van Gogh, would be a massive understatement.

Art in general rarely escapes referencing the past in one way or another. All of those who have any form of creative or artistic practice have their own influences that touch and inform their own production. Having said that though, these two particular exhibitions are extremely explicit in their referencing of influences and acknowledging the creative forces that lie behind their projects.

Let us start with Loving Vincent. I’m used to seeing museum spaces filled by paintings made by Van Gogh. I’m a regular visitor to both the Van Gogh Museum in Amsterdam and my local museum the Kroller Muller in the central Netherlands. Both have excellent collections and both have galleries filled with both the Van Gogh’s art and crowds of visitors. From a distance the experience in Den Bosch looked similar, walls filled with vibrant, loosely painted images and crowds of people. There is though a difference, here there is not a single painting made by the famous Dutch man. It is a strange experience. Like the film itself it is rather a strange experience. If there ever was a painter whose work seems, through its inherent vibrancy, not in need of being animated it is surely Van Gogh. Yet the film does have a sort of hypnotic attraction. The relatively course animation techniques seemingly allowing the paint to flow across the cinema screen. Some parts work better than others and shear visual experience does tend to occupy your attention, at the expense of the narrative that the filmmakers were also trying to present. 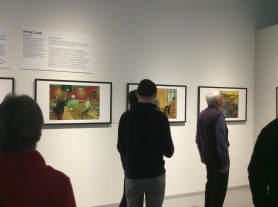 The whole project is a Labour of Love. An infatuation with these iconic images. With this as a backdrop, and with the film in the back of my mind, the technical process is kind of interesting to see. But does it all warrant a place in a museum. Is it more than an advertisement for the film? I’ve always maintained in my teaching, even to the youngest pupils that art is about the ideas. Are there ideas here on display here?

There is clearly an audience for the exhibition, but I have to confess to feeling strangely perplexed by the visit. What are we actually looking at here? A series of paintings made by artists, or are they illustrators, who are all working in a style that is as close as possible to the way the Dutch master handled his paint 125 years ago.

Tim Walker’s exhibition in the same museum in Den Bosch is rather different. He too reaches back into art history. This time though, to a single work, The Garden of Heavenly Delights by Den Bosch’s most famous citizen, Hieronymus Bosch. Walker acknowledges in the forward to the display that he has always had a fascination for this particular painting. Is it an image of “naïve joy and freedom” or “playground of corruption and sexual deviance” is one of the introductory questions.

Having seen the work in the show I definitely feel that Walker comes down heavily on the latter choice. These are disturbing images. Staged photographs with a painterly quality, figure compositions that ooze a depraved sexuality and nightmarish menace.

Coming as he does from a fashion industry perspective with its slick images of perfection this does come as something of a contrast. Yes there are certainly elements of his fashion roots to be found. Overly theatrical….perhaps, but the photographs in the Noordbrabantsmuseum make for uncomfortable viewing, for me at least. It begs the question, would Bosch’s original work have offered still more uncomfortable viewing for its original audience? Being as it is, a warning of the hellish world that could be waiting for these original viewers back in the sixteenth century, in the afterlife.