Earlier today I posted this picture.  Several people have asked for instructions on how to make it.  It’s not too complicated, and can also work well without the earth appearing to be in the hole.

It does need a large piece of paper, or several pieces joined together.  I did the bulk of the practical work together with a class of fifteen year olds.

A year ago I posted about a reverse perspective project that I had done with the twelve year olds that I teach. It is fair to say that the results of the three dimensional drawing assignment (based on the work of the British artist Patrick Hughes) seemed to trigger considerable interest, and I continue to experiment with other ideas in a conmparable direction.

I have always been interested in the geometric in art and the tensions between two dimensions and three dimensions, illusionism and perspective. These interests have regularly found their way into my own artistic practice.

The reverse perspective project of last year certainly played into this area, and other recent art projects have done so as well. The two examples here are certainly not approaches that are unique. One relies on a form of perspective correction that is often used in street art drawings, and the other has some small scale similarities that makes use of how we view photographic images. 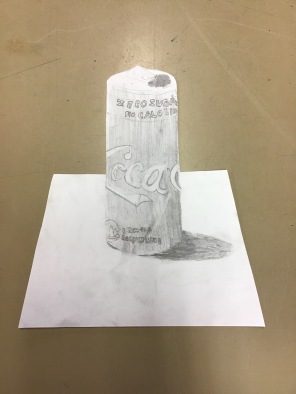 The larger ‘hole in the ground’ work that I made together with one of the class of 14 and 15 year olds that I teach. I used it last week at our school open day to draw people into an exhibition space of other artworks made by the pupils.

I hadn’t anticipated the success of the idea, and had people queuing out the door, waiting to be able to come in and take their turn at being photographed on the edge of the artwork. A PR success for the school and hopefully the art department too.

I’ve had a lot of interest in my previous post about reverse perspective. I’ve promised a number of people that I’d try and post some more detailed instructions, so here they are:

Firstly a few basic facts about how I worked……

Click on the link below to download this file as a .pdf that is suitable for printing

I have included an A4 printout diagram here, I didn’t give my pupils anything that was printed out, I preferred to draw it all on the board at the front, step by step and explain as I went along.

The printable has all the lines that play a part in this assignment on it all at once, the PowerPoint that I have added shows a step by step series of photographs of the order that I carried out the various steps. Click on the link below for the PowerPoint.

I’ll be interested to hear how you get on if you give it a try.  Incidentally, the illusionistic effect works better with:

Every year in my first year classes (12 year olds) I touch on the principles of perspective, at least in its one point form. We do a little art history, take a look at Masaccio and Mantegna. We make a drawing, or a painting that in one way or another makes use of one-point perspective. There are of course lots of ways in which this can be done.

Mostly for my own amusement I mix things up a bit on a yearly basis, and also a bit dependent on just how complex I dare to make it with a particular class (although it has to be said that with some classes the term vanishing point seems to refer more to an ability to follow instructions than a place on their drawing!).

This year I decided to tackle head on an approach I’ve pondered doing for a couple of years now. It makes use of the three-dimensional ‘reverse perspective’ that British artist Patrick Hughes employs. Like perspective itself, it is a bit of a visual trick, but one that invites us to look again and question our interpretation. Whether we are looking at the resulting artwork for real or on film, in summary everything seems to not be quite as you would expect.

The drawing assignment begins with an essentially quite straight forward piece of one point perspective of an interior space. The receding lines along the top and bottom of each wall converging at the vanishing point. The most important alteration in this familiar setup is the wedge in the gap between the wall and floor or ceiling (see link to a model below, where the light blue parts need to be cut away). By removing this wedge you are able to fold the paper so that a sort of pyramid form is made, one that has had its point cut off. This can be folded in such a way that the back wall of the drawn room is forced forward. In effect it sets up a conflict between the visual illusion of the drawing that places the back wall in the distance, and the physical reality of the three-dimensional form that has been created that places the same back wall actually closer by. It is this conflict that makes the illusion so intriguing.

The pupils this year followed the instructions carefully, added colour and folded. The results had something of a magical quality for the class. Judging by the number of views of the films that I made of the work and posted on the school’s Instagram account it had a fascination for many others too. Try it for yourself!

I remember reading somewhere recently that an excellent way to motive a class is to say something like “I think this is probably too difficult for you….but we’ll give it a go anyway”. The philosophy being, give them a reason to prove you, the teacher, wrong!

At the time I didn’t think much of it, apart perhaps from thinking….’yeah….would they really go for that?’. Well, a couple of weeks later I have to admit to coming up with just such a statement (without intending to) to a class of 12 year olds and then watching them exceed what I thought they were capable of.

Most years I do a little perspective drawing with my first years. It fits in well with talking about the art of the Renaissance. Over time I’ve tried out various assignments, and for my own amusement and variation I continue to do this. This year I decided to try, with one of my classes, something a little more ambitious where they were to produce a two-point perspective interior space drawing, spread over two sheets of paper, with one pupil working on one half of the drawing and a second on the other.  The idea was to simulate collaboration, teamwork and plenty of discussion (in English, as I teach them in English, which is the pupils’ second language), plus of course to learn about perspective.

After a first session working, fielding questions about vanishing points, how the area where to two pages came together should work and just how accurate it all needed to be, I went home feeling that this was perhaps one step too far.

I returned to the lesson the following week ready to explain this, and that I thought it better if we maybe went for something just a little less ambitious.  There was total amazement and disagreement from the class.  From their perspective they had invested a lesson puzzling it out and felt now that they knew what they needed to do. Slightly reluctantly I gave way to their view and we continued.

Two weeks later and we’re finished and while the standard of drawing from the class is varied (as it always is with any class), the grasp of the perspective rules they have been working with is fantastic, I’m hugely impressed.

Whether or not my ‘I think it’s too difficult for you’ moment with the class was the turning point we’ll never know for sure. But the way the pupils rose to the challenge was fantastic to see.