For more than ten years my creative output has broken clearly into two parts. The studio work that has resulted in paintings, constructions, prints and works on paper.  All carefully worked out and refined, often in quite extensive series of incremental steps.  Alongside this has been an extensive series of small scale, rapidly made, landscape drawings and paintings that have filled hundreds of pages of bound sketchbooks.

These two series of work have, at times, hinted at the possibility of coming together and supporting one another. But up until now, although there have been tentative connections in one way or another, I have never really felt a crossover occurring or a serious engagement between the two branches.

However, that situation may be about to change.  It’s early days to shout too loudly about it, but maybe, just maybe, things are on a collision course, time will tell.  Here, in the most recent studio work there is a genuine landscape image, reminiscent of one of my sketchbook paintings, stands central….and there are more to follow, possibly making use of images such as this woodland watercolour.

When time is short, particularly studio time, it is difficult to remain patient.  The feeling that every second counts as you try to squeeze creative time in amongst other, mostly work related, activities is a challenge.  This is particularly the case when you are learning new skills, skills that you need before interesting results might roll out.  The question of whether you are investing time that in the end will prove fruitless always nagging at the back of your mind. 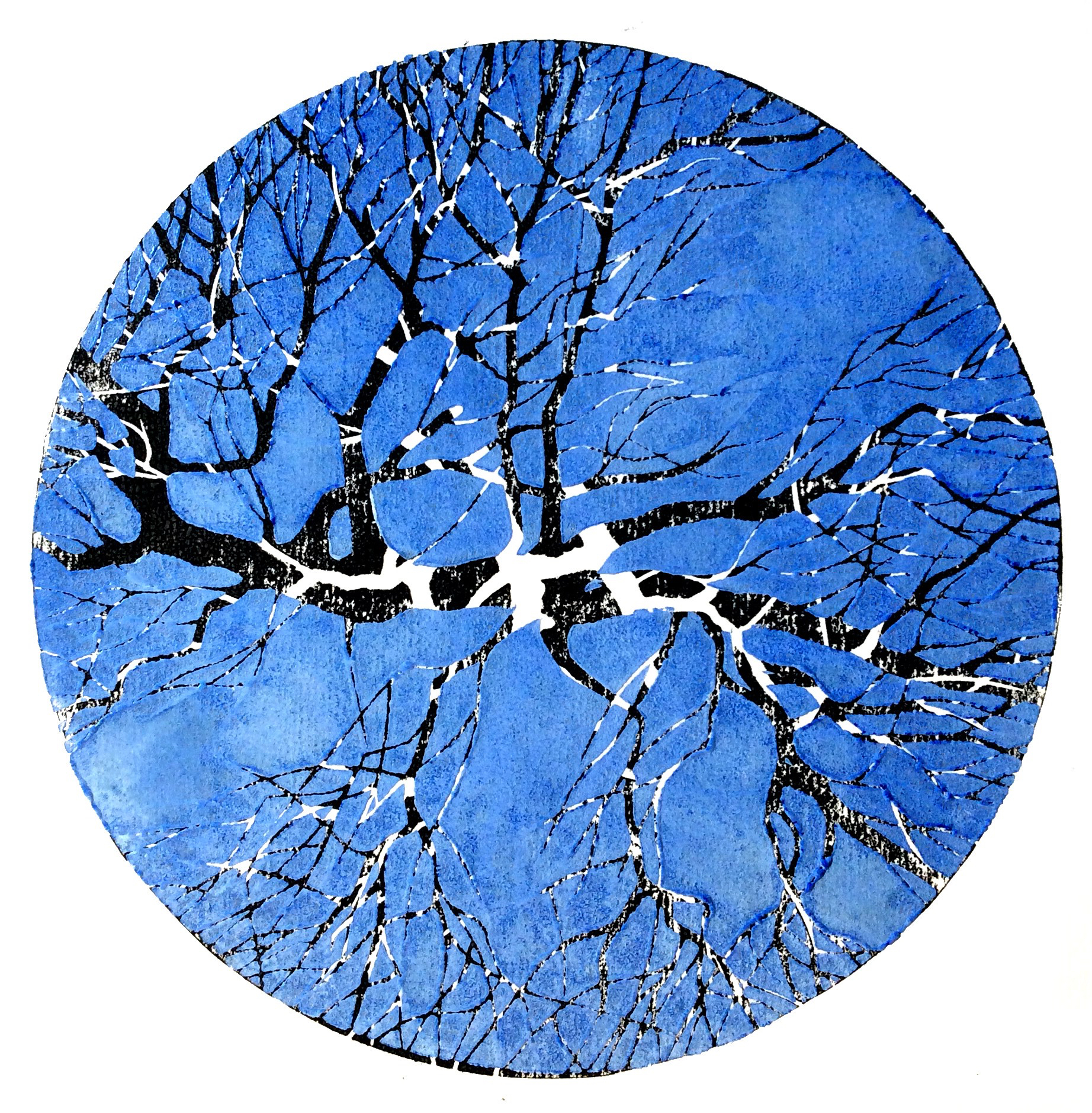 This is very much the case when it comes to printmaking.  Whilst an art student I spent a little time in the print room learning the basics.  Since then though, well, nothing at all. Earlier in the year I bought myself a small lino press because I suspected that my current  work might offer some possibilities to produce some prints.  I’ve had a few sessions making some initial attempts, with limited success. Today I have been busy again, and for the first time I have looked at the results and thought that there are indeed possibilities to produce some interesting images.  I’m not there yet, but am on the way I feel.  More patience and more experimentation in the weeks ahead, maybe we’ll get there.

Combining education and producing your own work isn’t always an easy an combination. You often find yourself saying next week will be quieter, there’ll be more time then.  Then a week later…..well, you get the picture.

In the last couple of days I’ve been making an extra effort to find my way back into my studio practice, finishing of paintings that were near to completion, drawing out the next plans and documenting photographically where I am currently up to.  The images here are a series of six ring formed canvases that I have been working on.  I suspect there might still be more in this fruitful series, but at the same time the current drawings I’m making are hinting at new areas and forms that these geometric and tree based motifs are heading.

These are quite labour intensive works, built up of numerous layers of paint, and each is accompanied my drawing, collage and digital work to plan out the possibilities.

Since Christmas I’ve been working on a series of drawings that merge elements of geometry with the more chaotic side of nature. Nature, you could say is being checked and controlled by hard edges being imposed on it.

The drawings have been progressing well, and at speed, so the point has been reached of scaling the up a little to see how they work in a larger form. 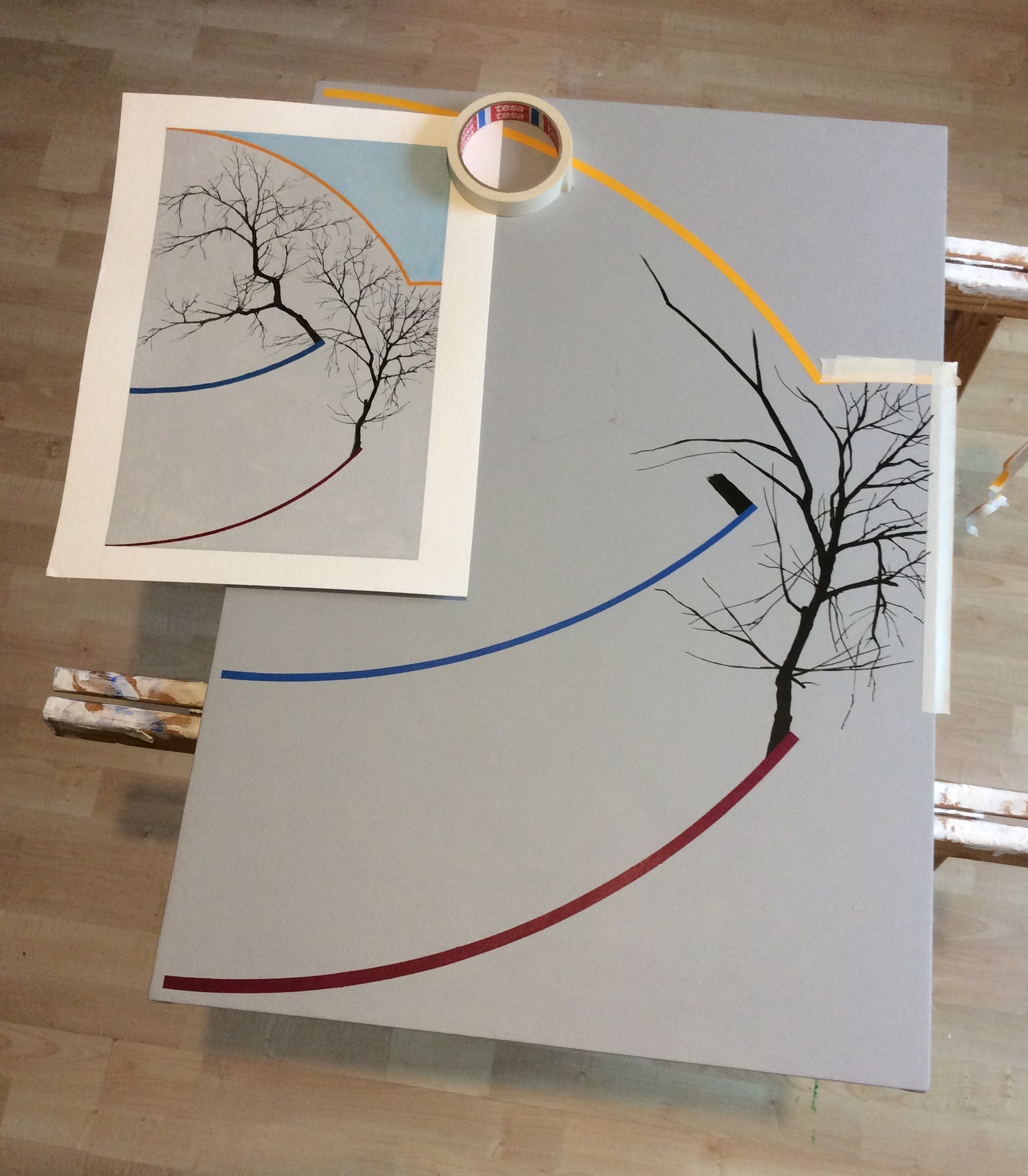 I’ve been working for a for a few weeks now on a commission project.  Progress is inevitably just steady as I try to fit studio days in amongst other commitments.  Its and interesting project as the three paintings that I will ultimately be making are all pretty much existing work, only they are much smaller.  Some colours are changing in the larger works, and the birds will inevitably turn out differently but the basic wall structure across the three canvases that together will be about four metres wide will remain true to the smaller versions.

So far with the first two canvases under way progress is fine.  The physicality of the curving wall in the empty landscapes is particularly satisfying to see develop as that seems to be working in quite a different manner to the smaller versions.

It’s the end of the school week and in my studio a canvas is ready, primed and the initial preparation work is done for the beginning to be made on an idea for a painting that has been rattling around in my head for the last six weeks. My working process is often quite slow and methodical paintings tend to unfold over weeks and months rather than hours and days. I’ve learnt to be patient in this regard. Studio time is always a balance between my three days a week educational work and any number of other commitments.

I feel excited by the work ahead. The concept for the painting is incredibly clear in my head, I’ve worked the plan out in a series of drawings and plans on the computer. In many ways it is simply a question of execution of the idea. Although ‘simply’ is a little deceptive.  The plan as it stands looks likely to be quite a labour intensive process and as anyone involved in the creative arts all sorts of things will, and do, happen along the way.

I haven’t posted a reflection on a day working on my own work for a while. Various reasons, the inevitable intrusion of other activities being the most significant of reasons. Still, the work goes on, even if it is not as speedy in its production as I would desire.

Today I’ve been working on the two images shown here. Both are, essentially built of the same components; a sky, a bowing coloured wall in the foreground and distorted by perspective verticals that in the drawing on the left are trees and in the painting on the right have been reduced to single fine lines. Also in both cases there is an ambiguity in whether the ‘wall’ is standing in the landscape or whether the landscape is possibly a sort of theatrical backdrop that has been painted or pasted onto the wall and now appears to be becoming separated from the surface creating the illusion that it is bending in space. The way in which the verticals are, well not vertical, play into the visual uncertainty.

When starting these pieces I thought that the drawing with the four tree trunks was just an experiment for myself, to prove that I was going the way of the greatly reduced ‘trees’ in the curved painting with its red wall. But having worked on the drawing with the trees today I am less certain. I think there is still work to be done to strengthen the drawing, particularly in darkening it to make it heavier, but maybe there are still possibilities worth exploring here.