The last weeks of the school year have arrived.  The pupils are intermittently at school for tests, a few last appointments and finally the picking up of reports.  Apart from a huge amount of clearing up, once this stage of the year is reached there is generally time at last to spend a little while working on a task that has been continually pushed to the side throughout the year.  That being presenting the work of pupils on the walls and in the glass cases around school. 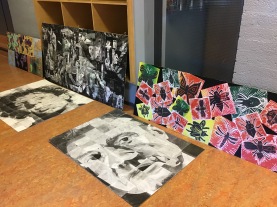 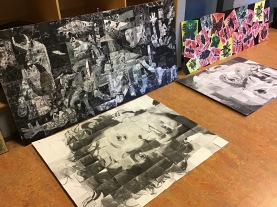 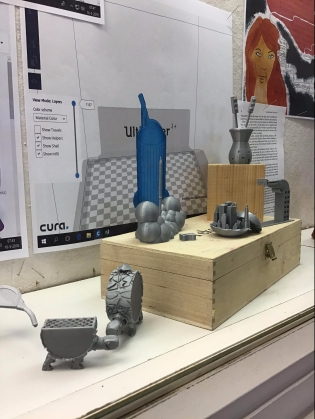 It is an important job, at least in terms of raising the profile of the art department in the school as a whole, both for pupils and staff.  Some great things do get made in the art department, we produce good final exam results, but still the importance of a bit of PR work is never wasted. Colleagues from other subject areas are generally pleased and interested to see the creative work that pupils produce. But undoubtedly the most important thing is building the interest of the younger pupils to potentially choose the creative subjects as an exam subject in our upper school.

From a personal point of view, I do also get a sense of satisfaction in seeing the pupils’ efforts presented clearly and well.  This is especially true for the larger group projects that I have carried out with whole classes during the last months.

Teenagers are to various degrees and depths interested and engaged with the cultural world around them. They love to watch movies, they listen to music, they follow extended TV series, they take photographs, they are interested in fashion and what they wear, the architecture and built environment around them, the design of stylish cars, many dance or play a musical instrument.  They have the beginnings of becoming adults who later will be culturally engaged, not necessarily as active participants, but at least as active receivers and users of the cultural world around them.  There is an inherent interest, and in some cases the ability to perhaps take one step further and become someone who might actually have a part to play in the broad and varied cultural environment.

Having said all this, February is for me, a culturally frustrating month. It is the month where the third year pupils (14-15 year olds) that I teach are making their so called profile choices, selecting the group of subjects that they wish to study in their last three years of secondary school. For those not familiar with the Dutch ways of education, this means choosing a selection of around nine or ten different subject areas, it is a broad choice. Some might say that it is the strength of the Dutch system that you can keep so many doors open in terms of future study and career choices. Compared to the British system where I studied, it allows for amazing diversity, I had to be satisfied with just three subjects (in my case maths, physics and art) for the last two years at school in the UK.

Yet despite the wide scope of choice on offer, I and my art department colleagues are confronted each year by the same problem of persuasion of pupils to consider choosing a two hours per week of art as an exam subject. For three years the same pupils will have bounced into the art rooms for their lessons, for so many one of the favourite lessons of the week. Many (although of course not all) will have shown great ability and interest in making surprising and imaginative work. So what is going on here when it comes to choosing to take the one cultural subject that the school offers?

The overriding feeling that I have is that decision making is driven by a sort of safety first career related perspective. Pupils, and I dare say parents too, are driven by a career/financial mind-set. It’s a kind of academic subject equals good, versus vocational subject equals risky, view of the world. But it is a view that throws probably more than one important baby out with the bath water.   If I’m honest, I don’t feel that the advice that pupils and parents are often given helps this situation, it tends to reinforce the ‘safety first’ careers perspective and fails to acknowledge just how many people work in the art and cultural sector.

But in away the career building view is not the central point here, remember, we are talking about the art subject being just one of ten subjects on the timetable a pupil will be following. Choosing the subject as a career choice isn’t for many the most important or relevant point.  What the arts offer is something longer term. It is about giving our young people baggage to take with them into adulthood. Not baggage that will weigh them down, it is baggage that will enrich their lives, help them understand the world around them, give them perspectives on the past.  It is about developing opinions and encouraging diversity and insight in the world around us.