I’m busy working on a commission for a painting. It is a larger version of the circular ring formed paintings that I have been working on for a while now. For me it is also a fairly large-scale work, measuring 120cm across and that hole in the middle being about 62cm.

The most recent smaller versions have often been essentially the bringing together of two colours, built up in numerous layers to gain an intensity of colour that causes the optical effects of the composition to work best. The initial layers being put on with acrylic paint and the later ones being oil for a better surface finish and greater depth to the colour.

For this larger work I decided to continue with the dark blues that I have been experimenting with and rely on Windsor Blue being layered on top of Cerulean Blue and just a touch of Phthalo Green. The green part though has been something of a new area for me. I’ve been working this area up with a mixture of Permanent Green Light and Cadmium Yellow.

So far so good, but then comes those final layers of glazed oil paint to bring the surface quality to where I want it to be. This has sent be deep into the bottom of box of oil paints looking for the appropriate shade of green. Like I said at the beginning, I don’t often use green. A fact that was confirmed by the discovery of the 37ml tube of Cadmium Green made by Windsor and Newton that I plan to use. The paper covering of the tube has yellowed with time, it took a while to get the cap off the tube, but inside the colour was fine. I’ve bought many tubes of paint over the years, most of which I can’t remember where and when I got them. But this one is an exception, it is a last remaining tube (along with a tube of violet, what I also rarely use) that remain from a set I was given when I started my Fine Art degree at Wimbledon School of Art in 1987.

Thirty-two years on this Cadmium Green is finally to see the light of day and edge my painting towards its own finishing line in 2019.

I posted a week or so ago about returning to lino prints and the feeling that the medium was offering new possibilities.  One week further and I’m feel more certain.  There is still plenty to do, but progress is refreshingly fast. 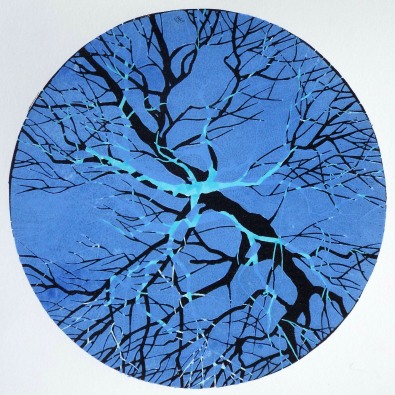 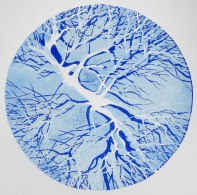 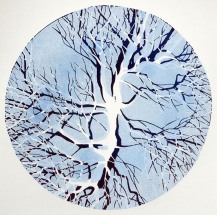 When time is short, particularly studio time, it is difficult to remain patient.  The feeling that every second counts as you try to squeeze creative time in amongst other, mostly work related, activities is a challenge.  This is particularly the case when you are learning new skills, skills that you need before interesting results might roll out.  The question of whether you are investing time that in the end will prove fruitless always nagging at the back of your mind. 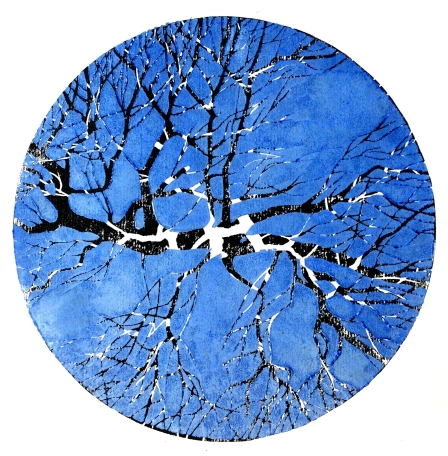 This is very much the case when it comes to printmaking.  Whilst an art student I spent a little time in the print room learning the basics.  Since then though, well, nothing at all. Earlier in the year I bought myself a small lino press because I suspected that my current  work might offer some possibilities to produce some prints.  I’ve had a few sessions making some initial attempts, with limited success. Today I have been busy again, and for the first time I have looked at the results and thought that there are indeed possibilities to produce some interesting images.  I’m not there yet, but am on the way I feel.  More patience and more experimentation in the weeks ahead, maybe we’ll get there.

The fact that I’m sharing the progress of these paintings is an indication that I’m feeling pretty content with the progress.  In the photograph it does all look very graphic, a quality that comes over a little less in the actual work. Inevitably the smaller scale works on paper progress at a higher tempo. 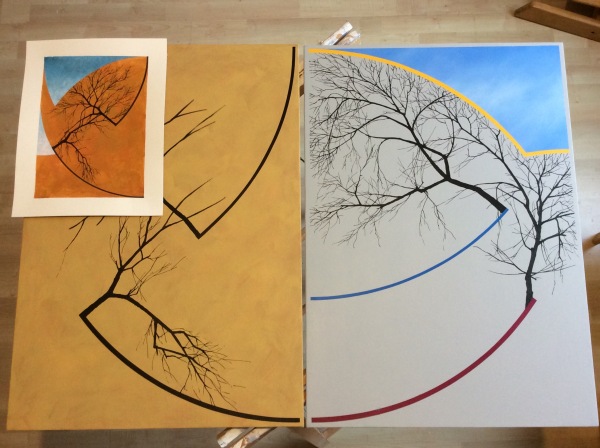 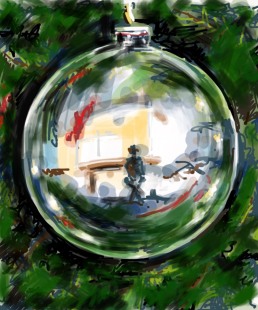 Time to do what I’ve been encouraging my pupils to do all term, experiment and play a bit with their iPads.  A bit of pure iPad drawing.

For those interested in the technical details, it is made with Bamboo Paper to start with and then Brushes Redux.

I haven’t posted a reflection on a day working on my own work for a while. Various reasons, the inevitable intrusion of other activities being the most significant of reasons. Still, the work goes on, even if it is not as speedy in its production as I would desire.

Today I’ve been working on the two images shown here. Both are, essentially built of the same components; a sky, a bowing coloured wall in the foreground and distorted by perspective verticals that in the drawing on the left are trees and in the painting on the right have been reduced to single fine lines. Also in both cases there is an ambiguity in whether the ‘wall’ is standing in the landscape or whether the landscape is possibly a sort of theatrical backdrop that has been painted or pasted onto the wall and now appears to be becoming separated from the surface creating the illusion that it is bending in space. The way in which the verticals are, well not vertical, play into the visual uncertainty.

When starting these pieces I thought that the drawing with the four tree trunks was just an experiment for myself, to prove that I was going the way of the greatly reduced ‘trees’ in the curved painting with its red wall. But having worked on the drawing with the trees today I am less certain. I think there is still work to be done to strengthen the drawing, particularly in darkening it to make it heavier, but maybe there are still possibilities worth exploring here.