Intentional or not, there is a strange coming together of art at the Fundatie Museum in Zwolle in the Netherlands. Two quite separate exhibitions, one of Die Brücke and Der Blaue Reiter the German movement of expressionist art from the begininning of the twentieth century, the second by the Dutch artist Rob Scholte create this contrast.

The display of the German expressive paintings from a century ago features many of the names that you might expect, Emil Nolde, Ernst Ludwig Kirchner, August Macke, Franz Marc and Max Pechstein are all to be found. The museum website documents the show well as does the second link here on Wikipedia:

The paintings displayed have many expressive hallmarks. Free and aggressive use of the brush and the marks it can make for example. There is also an abundant use of non-naturalistic colour and a freedom in the way the creation of form is approached and faces and figures are manipulated, stretched and adjusted to fit pictorial purposes.
It is all very much what you might expect from expressionistic art, a cutting loose from the art that had gone before that had become too self conscious of itself.
With this as a visual background it is interesting to then move on to the Scholte exhibition. The display of many hundreds of embroidered artworks is undoubted a creation to the Dutch artist, however the individual artworks themselves technically speaking aren’t. Spread out in expansive clusters are embroidered artworks that the artist has been collecting over the years. Picking them up from flea markets, jumble sales and second-hand shops.

Some of the groupings are of rather kitsch hunting scenes, flower arrangements and the like. Perhaps the most engaging collections are the embroidered versions of icons from the worlds museum collections. Multiple versions of Rembrandt, Vermeer, Fragonard and Millet can all be found. It should be underlined just how many of these images that there are to see, spread across the museum walls in loose grid arrangements.
The variations in the various version of the same base image is one of the engaging aspects of the exhibition. These variations are rather greater than you might expect, you might think that one embroidered version of Rembrandt’s The Night Watch would be much the same as another, the whole point of this form of embroidery being to meticulously execute the sewn version of the original and as accurately and evenly as possible. 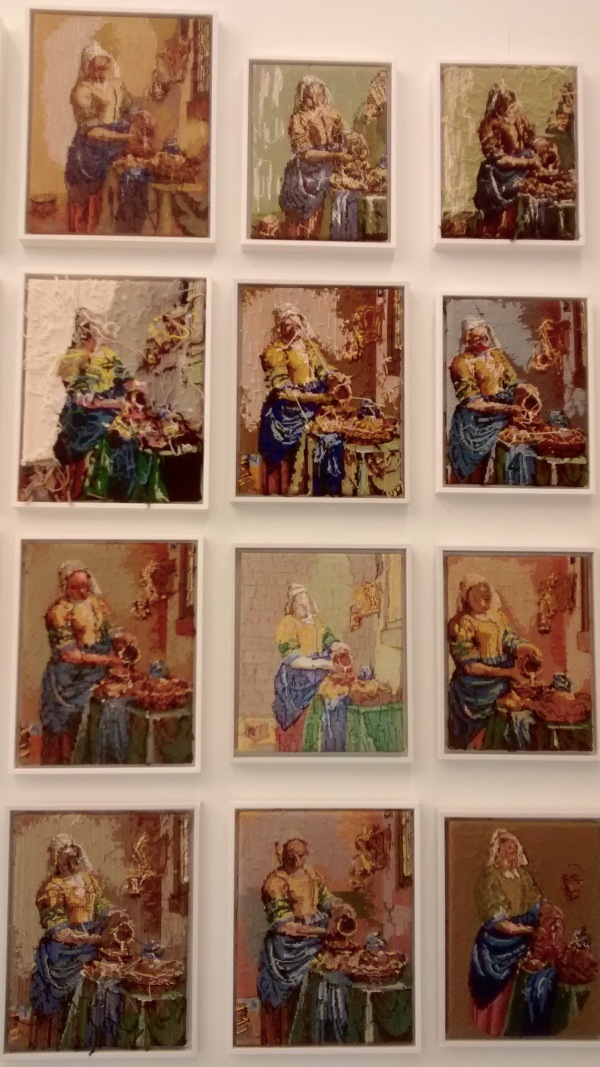 It is here that Scholte provides the twist, by displaying the reverse sides of the embroidery rather than the front sides. The variations and irregularities are fascinating to see. It is also here that a surprising parallel with the German expressionist work arises. These painters from the beginning of the twentieth century were interested in a looser and less self-conscious approach to there image making, less lethargic and more expressive. When you look at the reverse sides of the embroideries you are struck by the “unselfconscious” way many of them are made. This is of course hardly surprising when the makers’ attention has been so fully engaged with the other side of the image. Many of the resulting images have an extremely expressive quality as abundances of loose threads cross cross one another leaving an often chaotic, reversed and yet recognizable end result.
It is tempting to describe the work as being almost accidentally made, but that is to go a step too far, for in most cases it is functionally that governs. The loose threads are knotted off and twisted away. It is how this is done that creates the expressive and loose qualities. Although even here there is the extra variation in the way one work rapidly secures loose ends, whilst another applies a rigorous system of neatness to the back as well as to the front.

One thought on “A Curious Expressive Juxtaposition”